What with the 2021 Indian Premier League (IPL) looming large in world cricket's consciousness, you would be forgiven for forgetting about an ODI series out of sight and mind on the sharp tip of Africa. That would be a mistake, because the rubber has been a tonic for a format that too often is an unloved middle child that has all of its siblings' lesser qualities and none of what makes them exciting.

Unlike in Test or first-class cricket, you don't need to dismiss your opponents to win. Unlike in T20s, you don't need to bat like blazes to stay in the contest. Who needs 100 overs of nurdling and dot-ball bowling? That's the serious design flaw of the 50-over game, and there are a myriad examples to bolster the argument. But sometimes that narrative is challenged, as South Africa and Pakistan have done in the past few days.

At Centurion on Friday, Pakistan prevailed off the last ball of a match that featured centuries on either side; by Rassie van der Dussen and Babar Azam. At the Wanderers on Sunday, Fakhar Azam's brilliant innings was ended seven runs short of a double century by a wonderful throw all the way from the boundary by Aiden Markram. And by Fakhar believing the ball was going to the other end, and thus slowing down and turning around when he should have been running for all his worth. Was Quinton de Kock guilty of deception - and thus deserving of punishment - when he pointed dramatically at the non-striker's end as Fakhar ran towards him? No, said the umpires. And that's that, as far as officialdom is concerned.

Fakhar seemed to accept that he should have run harder, but also that he had been duped. Or deceived. His reaction would seem at odds with cricket's laws, which say "it is unfair for any fielder wilfully to attempt, by word or action, to distract, deceive or obstruct either batsman after the striker has received the ball". Tabraiz Shamsi has made the case that De Kock was not trying to fool anyone but instead ensuring that, in a frenetic final over, the other end of the pitch was covered by a teammate, lest the ball end up there. But the unvarnished laughter of the South Africans as Markram's throw hit the stumps in front of De Kock with Fakhar short of safety could only be translated as: "He fell for it! Can you believe that!" The South Africans looked like schoolboys sniggering at a drunkard passed out on a street corner, trousers around ankles.

Sadly, given that context, De Kock is not in the script for act three of this drama, which plays out at Centurion on Wednesday. Neither are David Miller, Kagiso Rabada, Lungi Ngidi and Anrich Nortje. All have left the series hanging in the balance to play in the IPL. Nortje has been the series' star bowler, taking seven wickets at an average of 16.28 and an economy rate of 5.70. Quietly, almost, Rabada has been the cheapest bowler of the rubber at 4.70. Miller scored 50 in each game.

Nortje, on current form, will be the most difficult of the five to replace. That job will fall to Daryn Dupavillon. What will be expected of him? Bowling coach Charl Langeveldt answered the question emphatically during an online press conference on Tuesday: "He has to be our enforcer. He has to do the job of Anrich Nortje." It's a big ask considering Dupavillon has played only one ODI. More happily for the home side, Van der Dussen, who followed his unbeaten 123 on Friday with 60 on Sunday, is still around.

The Pakistanis may, for once, smile at the petty politics that keeps them out of the IPL: all the better for their chances of winning the series. As they are a keenly competitive and creative team it would be no surprise should they, in response to the confusion caused by De Kock, employ some tricksy tactics of their own in the field. 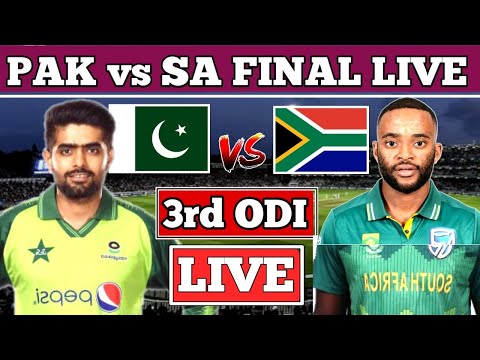